Angela Marker Smith has over 25 years of diversified and strategic financial and operational experience servicing clients in the manufacturing, telecom, insurance, oil & gas and healthcare services industries. She has participated in Chapter 11 filings and administration, 363 sales, disposition of assets, cash flow analysis, auditing of financial reports, and business plans.

Prior to GlassRatner, Angela was the CFO at Howell Munitions & Technology, Inc. (HMT), which included nine other separate entities. HMT was a high-volume manufacturer of bullets, cases and ammunition. She was instrumental in working with over 25 different private equity firms looking for funding for the company during a struggling time in the industry. Angela coordinated with all external auditors, bankers, tax preparers and other management on behalf HMT. She assisted in the bankruptcy filing process for this manufacturing company that included eight separate debtors, preparing all schedules, monthly operating reports, cash flow reports and projections and support to the CRO and legal counsel. Prior to the bankruptcy filing, she worked tirelessly to identify areas of the company that could cut costs and control spending where the company could be profitable during a time in the industry that was contracting.

Before HMT, Angela owned her own accounting firm for over 10 years, supporting small to mid-size companies with their planning, budgeting, reporting and tax returns. Most of her clients were Health Services groups including an Oral & Facial Surgery Center and Dental Practices. She assisted them with their monthly reporting, tax support and development of their retirement plans.

In addition, Angela worked as an FPA Manager for the public telecommunications company, Verizon Wireless, where she planned and managed their operating and capital budgets for the Network, Systems and Operations Departments. She was a member of multi-million-dollar capital projects during a time of extreme expansion. She prepared and/or reviewed Business Cases and Plans on major projects affecting the department. She managed the Technology Transfer process, which included working and negotiating with legal, contracting, international partners and external vendors to ensure all contracts were created and managed in the best interest of the company.

She went on to help manage various projects at Verizon Wireless, from the planning to implementation stages. Such projects included the Cell Phone Number Mobility Project related to all Network, Systems and Operations. She was the project lead for the conversion of a new Time Reporting System for 300+ employees, including the development and tracking of Work Breakdown Structure and Timeline. Angela was also the project manager for the Oracle Financials to PeopleSoft Financials conversion for a department budget of over $40 million.

While employed at Deloitte and Touche LLP, Angela audited private and public companies in the Insurance sector including California Compensation Insurance Company and Foundation Health Insurance Company. She prepared both Statutory and GAAP Basis Financials and Notes to the Financials, while also working on the California Earthquake Authority that offers earthquake insurance to California residents.

Angela holds a Bachelor of Science degree from the University of Idaho and a Project Management Certificate from University of California Berkley. She is a Certified Public Accountant (licensed in Idaho) and a past St. Joseph Regional Medical Center Foundation Trustee. 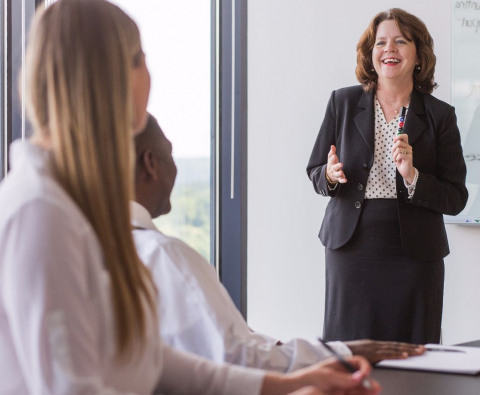